Should We Ban Books in School Libraries? 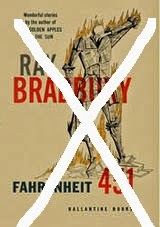 Here is my final installment of my Banned Books Week posting. This post is excerpted from a section of my Master’s thesis on censorship in school libraries from more than twenty years ago. My opinion has not changed. Some content has been edited and updated, but not censored.

Censorship in schools did not begin with Catcher in the Rye. In The Republic, Plato proposed to banish poets and dramatists for the making the Gods look less than God-like. He wrote that fiction had a band moral influence on the young. This ideology laid the groundwork for today’s justification for removing books from school libraries..

During the nineteenth century, Anthony Comstock, a zealous fundamentalist, penned a book entitled Traps for the Young, noting that light literature, newspapers and artistic works, including literature, were traps. He believed anyone who read “dime novels,” today’s equivalent to Young Adult, was doomed to a life of degradation and Hell.

Censors often have not read the materials which they challenge, or have only read isolated passages out of context. An example of a ludicrous dispute is the often challenged Steinbeck novel The Red Pony. In the 1980’s, the Vernon-Verona school District labeled the book as “a filthy and trashy sex novel.” If the challengers had bothered to read the book, they would learn this particular work by Steinbeck is a clean-cut tale of a boy and his horse. Because Steinbeck, who also authored East of Eden and The Grapes of Wrath wrote The Red Pony the assumption is made that this, too contained questionable materials, yet this book continues to appear on banned book lists.

Censors believe book have behavioral consequences leading to premarital sex, violence, and questioning authority.  The two most often censored aspects of books are language and sex, the fear being that teenagers will emulate behavior of the characters in the book such as Holden Caulfield in Catcher in the Rye. Teens hear this language every day in the hallways at school, or if they have jobs, out in the real world.

These same censors do not give students enough credit for their ability to discern when language is appropriate or not. Students know literature and real life are different. It doesn’t mean the words themselves should be emulated, and students who use an F-bomb or other curse word in class are usually punished, but colorful vocabulary is a part of life. If authors sanitized their dialogue by substituting expletives with phrases like “Oh, fudge!,” or “Drat and  Sugar” they lose credibility with their readers.  Young adult author Robin Brancato states, “…when I employ ‘bad language’ as you call it, and references to sex, it is not because I think these are needed to sell books or hold the reader’s interest, but because the body functions and the names for them, both polite and impolite, are parts of life, and I am interested in portraying life as it really is.”

Almost no literature is without sex. The Bible, beginning with Adam and Eve, is loaded with sex and sexual references, thus making it also a contested book in many libraries.

A distinction must be made between pornography and literature. Pornography is a Latin term meaning ‘writing about prostitution.’ In modern times, pornography has devolved into sub-literature comprising endless repetition, stilted dialogue and is most often anonymously written. Unlike literature, pornography’s intent is not to evoke realistic emotion or feeling; it is merely designed to titillate.

In the not too distant past librarians themselves were the primary censors. In early volumes of the American Library Journal, censorship was encourages through articles written about the dangers of certain types of books, particularly fiction. It was not until the Library Bill of Rights was adopted in 1939 that a clear cut policy was adopted.

The most ironic challenge is Fahrenheit 451, a book about book burning books. Written in the early Fifties about a futuristic world (which eerily resembles us today with our ear buds and wall sized TVs), fireman are dispatched to homes where the owners are known to have books, in effect, destroying all intellectual knowledge.

The purpose of education is to not only communicate factual information, but to teach young people to be critical thinkers who can devise their own value systems. Censorship undermines the students’ ability to discriminate.

Al school libraries have criteria for selection of new materials. Some might argue that selection is a form of censorship, yet school libraries are constrained by curricular needs and tight budgets. It becomes a problem when librarians either enforce their own narrow fields of interest, or when community or administrators question materials available through the library/media center. A library media specialist’s responsibility is not to impose his or her viewpoints on patrons. A colleague once told she weeded the Negro Almanac because the term ‘negro’ offended her. Granted the title is dated, and if one has the budget to replace this with a suitable, updated source, then go for it. But I will defend keeping a book like this on the shelf for the information and historical perspective it contains. Our culture likes to pretend the Unites States does not have an ugly past.

There are no easy answers for the question of censorship. I consider myself open minded, but, I too have limits. I will not intentionally stock an item on my shelves which encourages or instructs a students on how to kill himself.  Nor will I add blatantly graphic works such as Madonna’s Sex book or Fifty Shades of Gray.  However, there are materials in my library which offend my intellect: the schlocky, badly written vampire romances or the ever popular, badly written child abuse memoir, The Lost Boy. Kids love them, and it’s not my place to judge what students choose to read. My goal is that students read, period. Once the seeds for story are planted, perhaps kids will gravitate towards higher quality literature. In any case, they will have the freedom of choice.