We hear news stories every day of people leaving pets, babies and toddlers in the back seats of cars, and we can’t imagine how someone can be so irresponsible. In the riveting new book Little Mercies, by Heather Gudenkauf, veteran social worker Ellen Moore, a woman who has dealt with countless incidences of child abuse and neglect, accidentally leaves her daughter in the back of her car on the hottest day of the summer in Cedar City, Iowa, while rushing to rescue two girls from domestic violence.  It can happen to any of us.

While the drama unfolds in the house where a man is holding a young mother and two girls hostage, Ellen is oblivious to the spectacle behind her until she hears the crash of breaking glass from her car.  When the limp body of her daughter Avery is pulled from the van, Ellen Moore’s life is shattered along with her the glass.

Meanwhile, ten-year-old Jenny Briard has come alone to Cedar City in search of a long lost grandmother. Jenny, a victim of child abuse herself at the hands of her stepfather, had been living with her hapless father, but after he is arrested, she has nowhere to go, and she bristles at going back to a foster home.

Ellen’s mother Maudene tries to help Jenny, but they are both inadvertently thrown into the turmoil surrounding Ellen’s mistake.  Told in alternating chapters between Ellen and Jenny’s stories, their lives converge in a surprising ways.

Gudenhauf’s novel is well paced, suspenseful and well written. Occasionally the narrative lags with a few typos and areas of repetition, but these may have been ironed out between the review copies and final print.  The believable characters and their conflicts will engage readers and lead to interesting discussions in a book club. Fans of Lisa Scottoline’s Look Again and Save Me or Paula Daly’s Just What Kind of Mother Are You? will enjoy Little Mercies.

Nest, by Esther Ehrlich: a Review 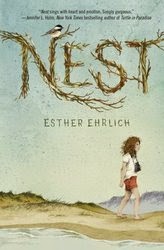 One of the many challenges for upper elementary and middle school Language Arts teachers is finding timely books with age appropriate characters and thought provoking themes, yet won’t spur parents to demand the principal to pull it off the shelf because of graphic violence, profanity or sex. Nest, by Esther Ehrlich, is a book that adults will approve of and young readers will love.

Set in 1972, the story centers on Naomi “Chirp” Orenstein. She and her father, mother and sister Rachel are year-round residents of Cape Cod, and the novel starts at the end of summer. At the beginning of the tale the Orensteins are a happy family; Dr. Orenstein has a therapy practice on the Cape, the girls get along well, and Hannah, the mother, is a former dancer who stays active in local dance recitals. Chirp, who gets her nickname because of her penchant for birds and bird watching, becomes friends with new neighbor and 6th grade classmate Joey Morell, whose parents often lock him out of the house.

Chirp’s idyllic world is soon shattered when her mother
,diagnosed with Multiple Sclerosis, falls into deep depression, and the story delves into darker themes of betrayal and grief. Yet Ehrlich skillfully balances this novel with resilience and hope while dealing with issues such as bullying, disease, child abuse, and suicide. Levity is provided through Chirp’s authentic voice, her passion for birds and her interactions with others.

Because the story takes place during the Vietnam War era, a time before cell phones and cable TV, it may be classified as historical, yet its themes are timeless. (Random House provides links to teaching tools.) The book stays true to an eleven year-old point of view where life hovers between childhood and adulthood, yet within that child’s lens is Chirp’s growing awareness of the world’s truths.

It would not surprise me to see this debut novel shortlisted for a Newbery or ALA award. I hope Ms. Ehrlich is working on more books for young readers so I can recommend them to my teaching colleagues. Nest is available September 9, 2014, for grades 4-8.

I would like to Thank NetGalley for my advance copy.
Posted by Laura Moe at Friday, August 15, 2014 No comments: 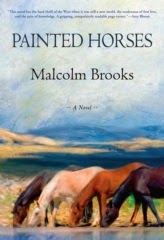 Painted Horses,  a novel by Malcolm Brooks, takes one back to the mid twentieth century before the vista was littered with endless strip malls, where untamed horses and impetuous wranglers vied for the land.  The tale centers around twenty-three year old Catherine Lemay, a young archaeology student, and a mystifying cowboy named John H who paints his mark on horse’s flanks. The land itself is a character, both benevolent, offering glorious vistas and water, and malevolent, with “a line of severe hills like the teeth of a saw blade rises massively in the distance….the stripe of clouds above the hills gathers amber then purple then blue.”

Even though Catherine has spent time on projects in Europe, the world she enters in Montana is more foreign to her. She has been raised within a country club lifestyle back east, with expectations to become a concert pianist, not a woman who chooses to dig through the earth for ancient relics.  Catherine soon proves, in spite of privileged upbringing, she is tenacious and focused, and uses her instincts to compel her to accomplish her goal of finding historical artifacts to prevent building of a dam that will flood all that remains.

Catherine suspects she isn't supposed to find anything, that she was purposely hired by Harris Power and Light, the contractor for the Army Corps of Engineers to build the dam, because she is a woman and a novice. Harris and Jim Allen, the wrangler hired to help guide her in and out of the canyon, seem accommodating enough, but they underestimate Catherine’s tenacity and her growing suspicion that she is being duped.

John H, the mysterious horseman, inadvertently watches over her, and becomes her ally. Throughout the novel his back-story is gradually revealed. Interestingly, John H served in a cavalry unit during WWII because of his skill with horses. John H seems an unlikely friend to the young archaeologist, but  by the end of the tale the reader cares deeply about him and Catherine, separately and together.

If the novel has faults, they derive from my own impatience with several passages bearing long descriptions of horses. (I know, duh, it’s called Painted Horses.) I don't dislike horses, but I don't know enough about them to distinguish one from another, and for me the narrative dips during those moments, but the fault is mine as a reader.

Another issue was occasionally I was unsure if a chapter was a flashback or taking place in the present. Because I was reading an uncorrected proof, this may have been resolved by labeling each chapter with a date or location.

Like most literary novels, the book does not have the stereotypical happy ending where the characters ride off into the smiling sunset; the ending has a realistic resolution. Fans of Annie Proulx or Wallace Stegner will enjoy this book. Painted Horses is an ambitious debut, a ruminative, adventurous story that resonates, and these characters will stay with me for awhile.