A community of Soloists

A few months ago I shared a book event with a writer I've "known" online for more than a year, but had never met in person. We met at a book event at Mother Foucault's Books in Portland, Oregon. 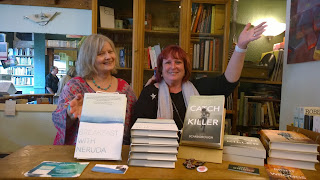 It turned out Sheryl Scarborough and I had more in common than just being YA writers with a ton of mutual writer friends. While my book is contemporary YA and Sheryl's is a YA mystery, the protagonists in both our recent books were searching for their missing fathers.


I love the odd confluence of  bringing our similarly themed books books together.  We writers tend to work alone, yet occasionally we convene and share our work. Within my critique group (there are four of us) we occasionally have a "mind melds" where a couple of us will use the same locations in our books. In a funny coincidence, two of my peers had characters nicknamed "Boo."

So while we are soloists, we writers are also part of a larger choir. We share similar dreams of getting our books published, making appearances, and perfecting our craft. Yet ultimately our goals are to engage readers and build an audience. So even though Sheryl and I had not met in person, we eased into a conversation as if we'd been friends for years. It reminded me of times I've heard musicians walk on stage and "jam, "producing extraordinary music without ever having met before.

In another odd coincidence Sheryl and I both had surgery on our right knees, so we're both learning how to walk again without pain..

Characters vs. Author: The Battle Ensues 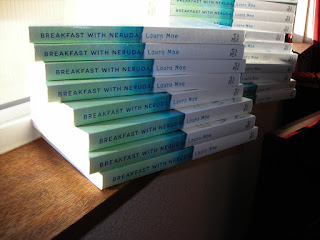 When BREAKFAST WITH NERUDA came out in 2016, I thought I was finished with the book..But my imaginary friends had other plans. Shelly and Michael appeared in my dreams with more scenes, locations and plot ideas. They have tortured my imagination, so now it's my turn to torture them back with more conflict, obstacles, and antagonists.

Yet with each arrow I sling at them, they exact revenge by taking the plot wayyyyy off course, causing me to write thousands of unnecessary scenes. Why did I like these people in the first place?

Each day I face the computer I think, I have no idea what I'm doing. Yet I pound the keys anyway. I tried taking the advice of planning things out, but I'm a 'pantser,' through and through. However, I do have a log line, which acts as a beacon. So I'm not paddling a canoe in the ocean. More like a tub boat low on fuel.

Enter to win a FREE autographed copy of Breakfast With Neruda.http://janetleecarey.com/dream-walks/plotter-or-pantser-with-laura-moe/

Stop and Smell the Flowers 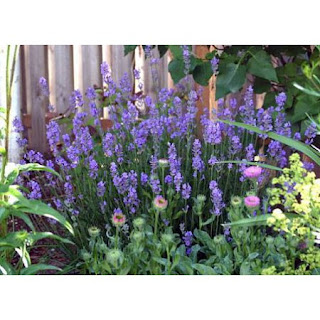 Finding a decent parking spot in is about as likely as winning the lottery, so finding one so sinfully close to downtown felt like a win. Instead of the usual half mile or more trek to my destination, I was a little over two blocks from the Louvre Cafe for a meeting. Not only was the parking fortuitous, I discovered a store I hadn't seen before: Pelindbaba Lavendar.

The store is dedicated to a variety of products made from lavender. Known for its calming properties, several products use lavender, such as lotion, soaps, and room spray. As soon as I walked in, I bathed in the aroma of the flower. Lavender possesses one of the most luscious scents in nature.

On a trip to , I had come across lavender chocolate, and this store sells bars of it in milk and dark chocolate. I'm surprised by the number of other items made from lavender, such as tea. I was immediately offered a sample of lavender tea. Expecting it to be flowery and scented, the tea had a slightly spicy flavor and a mellow aroma.

Walking through the store I recalled the lavender shrubs I planted between my roses when I still owned a home. My goal was to deflect the deer. Deer still ate my rose blossoms, but they left the purple flowers alone, so my yard always smelled nice in the summer. I periodically snipped sprigs from the bushes and placed them in vases throughout the house.

Aromatherapy specialists agree that spraying one's bedroom and sheets with lavender aids in reducing stress. Note: use real lavender, not something concocted in a lab. You can smell the difference. Lavender is one of those scents that pairs well with others, such as mint or rosemary, which can boost its medicinal properties.

One of my favorite recent discoveries is goat's milk soap made with lavender. The goat's milk makes the skin soft as a baby's butt, and the aroma lasts until the bar is gone. This shop offers several varieties of bar and liquid soaps scented in lavender. The store also carries cosmetics, honey, jams and jellies, diffusers, candles, jewelry, and home and pet products, all made from locally grown lavender in the San Juans.

As I stroll through the shop, the subtle aroma feels like a calming hand on a sunny day. If you're feeling a little stressed, stop and smell the lavenderat this locally owned establishment. 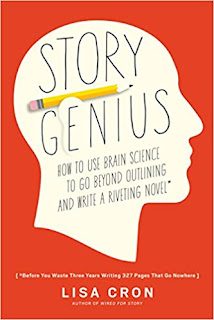 You may have noticed my absence these past four months. I've been steadily working on what I believed was the final draft of my follow up novel to BREAKFAST WITH NERUDA. For nearly three years I've been accumulating words, adding scenes and chapters, moving things around, and rewriting the beginning. An earlier draft was rejected by my editor at Merit, with the comment the stakes weren't high enough. So I examined the book again, chapter by chapter, and reordered scenes and re drafted from the beginning.

At 72,000 words I thought the book was finished. Yet I accumulated more rejections. While most of the agents I sent this to complimented the writing and the well developed characters, they couldn't relate to the story.

And that was the problem. When people asked me what my book was about, the best answer I could come up with is "about 300 pages" because I had no story.

Had I wasted three years on writing a book going nowhere? Yes and no.

Yes, because I spent 3-4 hours every day, including holidays, on this set of characters and their journey. I worried about Michael, Shelly and the others. In addition, I spent many hours researching environment and oceanography to provide authenticity to one of my characters. (The result of that is I now know how precarious our future is. Dystopian novels are within inches of being reality.)

Yet no, the time was  not wasted because I know everything about my characters-- much more than the reader will know. Most of the 72,000 words are unusable. At least in this story. I may be able to use some scenes in a subsequent story.

So I set aside what I called my Frankennovel, and with the help of a few writer friends' suggestions, started over. The last chapter of my 72,000 piece became the first chapter of the novel that seemed to write itself in three months.

How was this possible? First, I stopped working on the Frankenovel for a couple of weeks. Instead, I read. STORY GENIUS, WIRED FOR STORY, THE ANATOMY OF STORY, and TAKE OFF YOUR PANTS. While reading the first three books listed I learned I had no sense of story, and my book had a theme, but no concept All of these guides include exercises to question what is at the core of my story. The fourth book helped me see how being a panster vs. a plotter is an inefficient ay to write. all these books taught me if you can't define the truth behind your tale in a sentence, there's a problem.

It took me 72,000 words to find the inciting incident. Once I isolated that final chapter from the Frankennovel, I was able to move the real story forward. Same characters and location, but only about 15,000 words of the Frankennovel survived, written in as flashbacks. Other than what is now Chapter One, the rest of the tale is new.

The new manuscript weighs in at 76,000 words. My critique group is helping point out where the book sags and where it sings. The best part is I can now sum it up in one sentence. (which I won't tell you yet...sorry.) Having that logline is a beacon to keep me on track so I don't invent great scenes (like the funny one in Costco) that have nothing to do with the plot. Like Luke Skywalker in the original Star Wars film, my mantra has become "stay on target."

Stay tuned. Once this baby is ready to submit, I'll let you know more details. Meanwhile, back to revision.