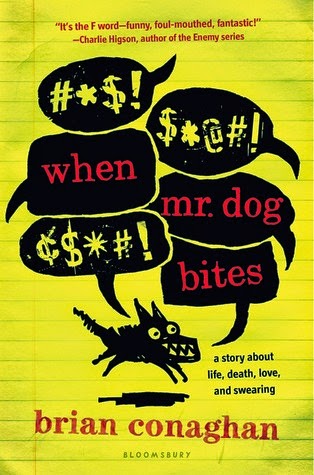 Amidst the cacophony of derivative, dystopian YA fiction emerges a unique and original tale in When Mr. Dog Bites, a forthcoming YA novel by Brian Conaghan. The hero of the tale is sixteen year-old Dylan Mint, a boy who attends Drumhill, or as he calls it, the ‘school for spazzies.’ His best friend, Amir suffers from mild Asperger’s and a stutter, and because he is Pakistani, is often a bully target. Dylan himself has Tourette’s, and his outbursts often get him into trouble. At the outset of the story Dylan believes he has only months to live after he overhears a conversation between his mother and a doctor, when the doc says,” life as he knows it will end in March.” Dylan begins a quest of “Cool things to do before I cack it,” which include having sex with a girl named Michele Malloy, finding a new best friend for Amir, and helping get his dad back from the war. Given these herculean tasks, Dylan’s odyssey is often funny, and ultimately transformative.

Dylan’s voice is engaging, and the diction and interior dialogue are inventive and reminiscent of Kerouac, such as “I was better off taking the hind arms off a brick wall”, [the teacher] “sometimes … treated us like a mad shower of window lickers,” [his mom’s eyes] “were like a butter knife to my heart,” and “I want to Usain Bolt out of here.” A large chunk of the book is in dialogue, and while I found most of it engaging, I missed Dylan’s interior voice.  Conaghan skillfully creates a likable, realistic character in Dylan without forcing the reader to feel sorry for him and his situation.

As an adult, and a secondary school librarian/teacher of many years, the profanity did not bother me, but this book may have a hard time finding shelf space in school libraries, which is unfortunate.  The words Dylan yells are nothing kids don’t hear in the hallways any given day, and all kids need to live inside the head of a character whose thought patterns may differ, yet still has the same human desires of love and belonging. Besides, part of Tourette’s includes involuntary eruptions of swear words. If Congahan, who acknowledges he too has Tourette’s, had sanitized Dylan’s tics and outbursts, he would lose credibility as a writer. This book can do much to clarify Tourette’s as The Curious Incident of the Dog in the Night did for Autism. YA fans of John Green, David Levithan and Kody Keplinger will enjoy When Mr. Dog Bites.