“Does it really have to be so be so difficult to kill yourself without being constantly disturbed?” 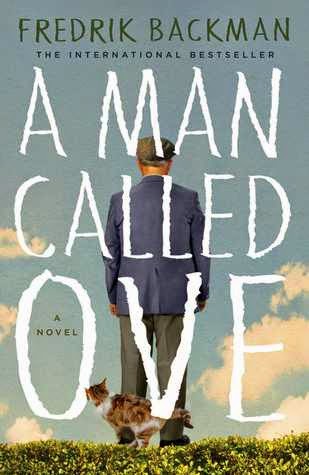 You know the type of book I’m talking about: one of those tales tempting you to call in sick so you can keep reading, but when you finish, you’re heartbroken because it’s over. A Man Called Ove by Fredrick Backman is one of those books.

Ove, a 59 year-old recent widower forced into early retirement has decided to join his dead wife rather than spend his days missing her. What could have been a dark exploration of grief turns into a lively tale in A Man Called Ove. In this novel, curmudgeonly Ove, the kind of man who inspects the neighborhood each day and takes down license plates numbers of cars parked for more than the allotted twenty four hours, displays great disdain for the “idiots” who cannot seem to read signs, and for the cat who starts hanging around outside his home. On the surface, Ove appears to be a grouchy old man who people avoid, and he likes it that way. All Ove wants is to kill himself and be done with it all.

His plans are thwarted by the arrival of new neighbors: an Iranian family consisting of a pregnant Parvaneh, her hapless husband Patrick, and seven and three year old girls. They meet when Patrick crashes into Ove’s mailbox with his moving truck. It does not go well, but Parvaneh recognizes a dormant charm on Ove, and she infiltrates his lonely life and provides the catalyst to force Ove to interact with his long feuding neighbor Rune, an odd kid from next door named Jimmy, a suspected bicycle thief, and a stray cat.

Alternating chapters reveal Ove as a youth and a young married man. He was never boisterous, but when his wife was alive she tempered any latent bitterness. The reader is privy to Ove’s one time happiness, series of disappointments, and his loyalty to Saab cars. (The feud with Rune was over Rune trading his own loyalty to Volvos for a BMW.)

Told in third person, the reader is privy to Ove’s distinctive voice with its subtle humor. On one of the days when he (unsuccessfully) tries to kills himself, he still performs his daily morning inspection. “Just because he’s dying today doesn't mean the vandals should be given free rein.”

This tale serves to remind us that each of us has a unique story. One can imagine Parvaneh lives by the creed, “everyone you met is fighting a battle you know nothing about. Be Kind,” and she refuses to give up on mean old Ove.

I read an author profile by the Swedish author, Fredrick Backman, where he displays this same deadpan humor, claiming his motivation to write novels, other than “surely this must be better than working,”  is to feed his “major his interest in cheese-eating.” I wonder if Backman drives a Saab.

Recently I've been clearing out my bookshelves for my move to Seattle, paring them down to half. Most of my Advance Reader copies I've given away or donated to the Friends of the Library bookstore, but this one I’m keeping. It will be shelved with books I plan to reread.