Are We There Yet, Mommy? 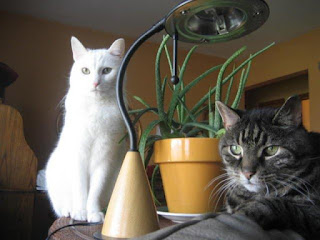 I woke up annoyed. Annoyed that I had gotten lost twice, and now had NO idea how to find I-80 west, annoyed that I had left my hoodie in the hotel in Peoria so I was chilly all night and slept badly, and annoyed by how crap I packed in my car. When I went out after breakfast to rearrange bags to make room for the kitties, I found a 75’ roll of aluminum foil. Why? Was I planning to build a McGyver bomb or retrieve messages from space? I gave the roll to the young woman at the front desk, who gave me excellent directions back to the freeway.

The cats were fairly compliant all day. This change of scenery and constant driving is stressful for all three of us. Plus all the crap I have to haul in and out of the hotel. It takes two trips with one of those luggage carts. One for them and their accessories, one for my stuff. They’ve both adapted pretty well. Pablo uses the box inside the hotel, but poor old Henry has a small one inside his crate, which occasionally he uses. A few times during the drive I noticed foul odors, but they were bovine. The expensive cat litter is working.

Today’s drive was smooth, even though my car noticed the higher elevation. Every time I had to slow down for construction it took a long time to get my RPMs back up to 75. In Wyoming the speed limit is 80.

Around lunch time I stopped at a Shell station in Kearney, Nebraska. I’ve never liked self- serve. I’m kind of like Cindy Sterling with lawnmowers at the gas pump. I find one which has an easy method and stick to it. The pump at this Shell station had instructions about as clear as mud, so I went inside to get help. The woman behind the counter was rude and condescending, and I thought, “I don't have to buy my gas here,” and I ended up glad hadn’t.

One exit away was a town called Odessa, and a sign advertised Shepp Brothers as having “the cleanest roadside restrooms in Nebraska.”  Their pumps were easy to work, and when I went inside to pay I entered a wonderland. Lucky for me my car is full or I would have gone on a shopping spree of scarves, clothes and purses. They also had groceries, so my lunch was two packets of cheese, a bag of Kettle chips and a banana. And the restroom was clean. I’ve traveled quite a bit but I’ve never seen a toilet that had a bidet function. One might expect such a toilet in a fancy French hotel but not a roadside establishment.

After getting lost in Lincoln, tonight’s dinner was in a Subway across the parking lot from my hotel in Cheyenne. I had a tuna salad sandwich on wheat with spinach and cucumbers. This hotel is right off the freeway, so setting out in the morning will be easy. I found another hoodie in my car to keep me warm in the AC. Right now Pablo is sleeping on it, but the room hasn't cooled off fully.