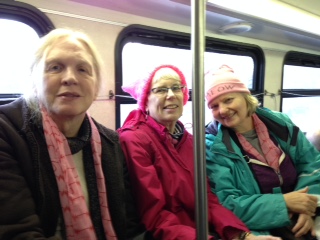 170,000 of my closest friends took a walk in downtown yesterday. I have an aversion to crowds, and a couple weeks ago when my friend Karla asked me to join her on the Womxn's March (the x is intentional, to signify it's not just for women,) my immediate thought was hell no. Yet I had made it sort of a resolution this year to do things out of my comfort zone. So there I am in the photo above, headed downtown to march.

Karla's cousin Pat was also going, and since she lived closer to downtown, we convened at her house to catch a 9 am bus into town for the 10 am rally at Judkins Park, SE of downtown. We boarded and luckily found three seats together. at every stop the bus grew more full with pink-hatted people carrying signs, and the last few stops before downtown it drove by crowded bus stops; there was no more room to take on more people.

Normally on crowded buses people get grumpy, but the atmosphere was fun, as if we were heading to a game or a concert. strangers were polite. The day before I had stopped at the dollar store to buy pink hats for Karla and Pat. I already owned a pink knit hat, and when I turned it inside out, the crown popped up like cat ears. I drew a cat face on it. 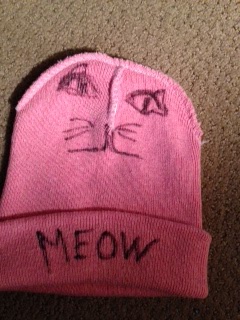 News networks in last week announced was out of pink all over the city, so I bought a few extras, and passed them out on the bus. I had also bought some pink scarves with hearts on them. 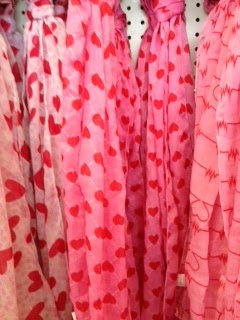 We got off at Seneca and Third and planned to transfer from University Station to a another bus close to the park. Two filled buses passed us by before we decided to get an uber or a cab. We walked a few blocks and found a hotel where the bellman flagged a cab for us. while the cab moved slowly through the mounting traffic, it was a relief to sit for bit as we had already walked quite a bit trying to find bus stops. and IS uphill both ways.

At 11 am, a half a mile from Judkins park, the three of us noticed marchers on the move already. "We'd better get out here," Pat said. we paid the cabbie ($12 plus a three dollar tip) and shuffled our way into the crowd. 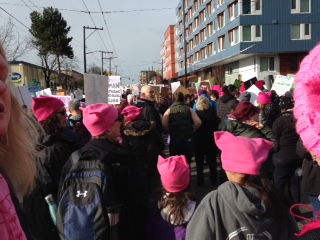 It took an hour for the pack to move from and 23rd to 20th because of the thousands of marchers feeding in from side streets. The final stop was , near the famed Space Needle. We had a long way to go. 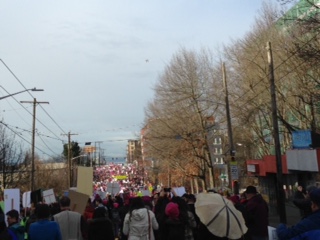 At one point the crowd let out a collective gasp as we noticed a pair of bald eagles swooping above us. https://www.facebook.com/KOMONews/videos/1309397482461914/

Several of my friends were marching, and the odds of running into any of them were 170,000:1, yet Karla's friend Dana spotted her in the crowd. But Karla is tall, and Pat and I used her as a beacon to help keep us together every time the crowd moved. 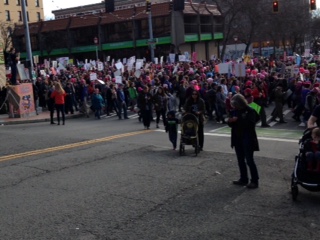 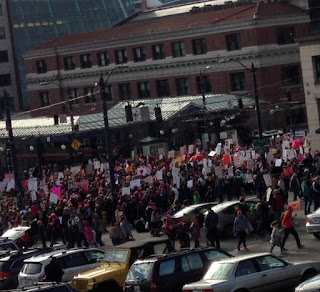 By 1:30, we made it to , and started to look for a place to eat and use the bathroom. Because it was Saturday, many places were closed, and the few that were open had lines out the door. Our bodies were tired and our bladders full, and Karla suggested we take the bus back to Pat's and find somewhere to eat at Northgate.

Buses weren't running on schedule due to congestion, so it after 2:00 when we boarded the bus north. This was, too, was overloaded with pink hat marchers. The woman seated next to pat said she couldn't march due to a health issue, but she showed her support by riding to and from the march to meet and greet marchers on the bus.

This sentiment was prevalent throughout the day. The crowds in the sidelines raised fists and signs to show their support, and motorists yelled greetings. Some stranded by traffic may have uttered profanities under their breath, but I didn't hear any negative shouts. At no time did I feel unsafe. Onlookers occasionally urged us to raise our signs and cheer, as if we were at a Seahawks rally, times 100.

Signs ran the gamut of Dump Trump, Love Trumps Hate, Keep your Tiny Hands off My Health Care, Make America Think Again,  a few were in foreign languages, and others reflected support for Clinton. One marcher held a giant photo of Bernie with "I voted for her" written on it. There are so many issues with the new regime I don't agree with that I didn't know what single issue I'd put on a sign. At the dollar store I bought a small plastic For Sale sign and added "My country is NOT" (for sale) on one side, and wrote 'Not My President" on the other. http://www.seattletimes.com/seattle-news/politics/some-choice-signs-from-the-womxns-march-on-seattle/

Normally the trip from downtown to Pat's would take 30 minutes, but the driver had to alternate his route through roadblocks and marchers so we didn't make it back to Pat's house until 3:30. By the time we ate lunch it was after 4:30.

Ever since the election I've felt a sense of malaise. It's not a partisan thing; I was a Republican may years ago, but that party has transitioned into a narrow minded, anti-intellectual agenda. The new agenda wants to set the clock back to the 1950s where times were great for Christian, white . Much has changed in the last 60 years. Our country's citizens comprise people of various ethnic and religious backgrounds, and we all share equal rights under the law.

Maybe all of us have rested on our laurels and comfortable lifestyles too long, and we dismissed George Orwell and Ray Bradbury's warnings in 1984 and Fahrenheit 451 because their books are fiction. Schools stopped teaching Civics, and Social Studies is not one of the critical subjects measured in standardized tests. The cost of this is apathy is we have a TV realty show blowhard as president.

In a march on the UW campus on election day, someone was shot. This took place after an Alt-right speaker had spoken on campus, and perhaps crowds were riled on both sides. Few details are available, and the suspect has yet to be caught.

But Saturday's much larger march incited no violence. After this march, my faith in my country has energized. I am not alone. All across the country, and parts of the world, millions marched peacefully.  My grandmother marched in Washington to ensure my right to vote, so this is a tip of my pink hat to her. Good job, . 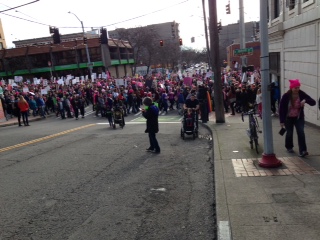