Beginning with the Middle 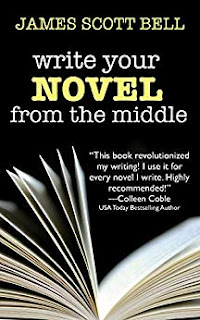 In the monthly writing workshop I conduct at a local library, the other night I talked about Write Your Novel From the Middle by James Scott Bell. The concept is described as “like popping open the hood and showing writers how they can be intentional about the story.”
In this book, Bell claims that for a book to be effective, there must be a “mirror moment” where the main character can literally or figuratively look in the mirror and questions his/her beliefs about himself. It helps enormously to know the middle moment/mirror moment, because knowing this moment “illuminates the entire book” you’re trying to write. It’s the “deep tissue of the story,” (or the engine that drives it.) which many writers don’t discover until much later, sometimes after several drafts or even once the book is published.

When Breakfast with Neruda came out and reviewers had their say, they found things in my novel I hadn’t realized were there.
.
Bell also claims that a good novel [or memoir] is about one of three types of “death stakes”:
the real death of the body,
death of a career or passion,
death of the inner self.

Once the writer discovers what type of death takes place, the transformation the protagonist needs to make to accept the death makes the story fall into place more easily.
For example, In the middle of the classic film Casablanca, Ilsa comes to Rick after closing time, to explain about why she left him. He calls her a whore, making her cry and leave. As Rick buries his head in his hands, he realizes he’s a selfish man who all along keeps love at arm’s length. The rest of the film is about what his transformation, and his ultimate sacrifice in his love for Ilsa by letting her go.
Exactly in the middle of The Hunger Games, Katniss accepts that she’s going die, and she prepares herself for death, but when she doesn’t die, she makes the realization she has survived in order to fight on.
Interestingly, this concept of beginning with the middle works equally well if you’re a pantser like me or a plotter. Pantsers may write many drafts before brainstorming the mirror moment. But then, once you know it, your pantsing will have a focus and guide you to the end. A pantser could also start with a mirror moment “out of the blue,” and then write a whole novel around it. Plotters will love knowing the mirror moment because they usually have a structure to build around it, and planning scenes will be easier as a result.

In my workshop, I asked my participants to go into the library and find a book they had already read and find the mirror moment. In most cases, that moment was exactly in the center of each book. Books that have multiple main characters the position of the transformation will vary, but essentially it works best near the middle.

I looked inside my own book Breakfast With Neruda, and Michael’s transformation takes place at the end of chapter Eleven, smack in the middle of the book (no spoilers, in case you haven’t read it.) The upshot is, if you’re having trouble with your manuscript (In my current work-in-progress, the second half has issues) go to the middle and see if the main character has had a "transformational" moment, and define what type of "death stake" it is.