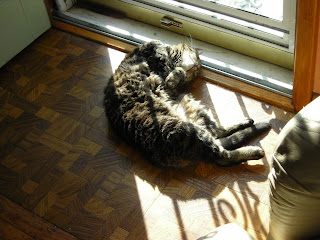 Pablo escaped last night! Not that I blame him. I’ve tried it a few times myself. But the big white oaf actually made it out the door. It was funny watching our human mom try to snag him, and he wriggled out of her hands and waddled his fact cat butt down the hall. He stopped, looked around the unfamiliar surroundings, but Mom chased him down, so he dashed toward the stairs and slipped through her fingers again. It was so exciting! Mom finally nabbed him on the third step and he sort of became rigor mortis cat until she dumped him on the floor back inside the room.

I’m not a big fan of the white cat, and the feeling is mutual. I was here first, but he comes along and acts like HE’s the alpha, so every once in awhile I have to remind him who’s boss. He’s bigger, but I’m meaner, and quicker. A quick left hook on the chin or the nose and he leaves me alone.

Ever since we started this trip, though, we’ve reached an impasse. We’re both prisoners in our crates and inside these strange rooms. I’m just glad we’re not riding in the cramped car every day. Mom still puts us in the crates every once in awhile when the Spanish ladies come to clean. It's annoying. These strangers come in and sing, and sweep and run the vacuum cleaner.

The white guy just sleeps all day now. Not that he didn’t sleep a lot before. He’s the king of laziness. But he used to interact more. Maybe he’s bored. Or he misses being able to lie on top of the car in the garage. I miss the sunbeams that came through the storm door in summer. But in this room Mom opens the drapes and puddles of light sometimes flood the floor.

I don’t know why we’re here. The birds and noises and smells are all different. Every night I smell animals outside our room. And they even let dogs in here! Last night there was one lurking outside our door. White cat and I stood at the ready just in case it broke in.

Right now I’m resting on my blue blanket, but I’ll start bugging Mom for our midnight snack soon.  She knows she won’t get a full night’s sleep unless she bribes us with treats.
MEOWWWWW.

Email ThisBlogThis!Share to TwitterShare to FacebookShare to Pinterest
Labels: cats