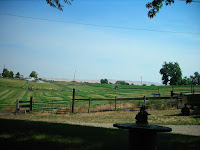 After several Days of speeding my way across he country (with cats!) I took a three day respite at my cousin Bob’s farm near Yakima, Washington. Bob and his wife Cheryl are chill people, so the only “planned” activities were dinner out on my first night at a brewery in Sunnyside, Sunday breakfast in Yakima (more on that later,) and Bob giving me a tour of his acreage and the dairy for whom he supplies hay.

Bob, Cheryl and I spent most of our time catching up since we last visited and having great conversations. They have a guest house on their property, so my spoiled cats did not mix with heir three kitties. Henry and Pablo were confused Saturday morning and I didn’t pack them up for another road trip. They gradually relaxed and took advantage of he large windowsills and sunny windows in the guest quarters.

On Saturday Bob took me on a tour in the afternoon while Cheryl prepared a ham dinner. While driving we spotted one of many osprey nests with two osprey inside.  The dairy farm itself was rife with a variety of odors. The air around the farm as hot and dry with a tinge of smoke, partly from area fires, and party because Bob almost accidently burned down his barn a couple of weeks ago.

On July 4th the three of us sat in Bob and Cheryl’s front yard and watched an array of fireworks heir neighbors set off. Cheryl remarked that fewer than half than usual in the area had fireworks because of the fire risk.

On Sunday, Bob, Cheryl and I headed to Yakima for breakfast at a combination auction house/restaurant. Several area restaurants had closed, so the already successful auction site devotes part its space to a full service restaurant. Cheryl said after they done they usually browse the furniture, but Bob needed to get back to the farm and swathe the alfalfa for hay. He let me ride with him inside the swathe machine for a few runs. 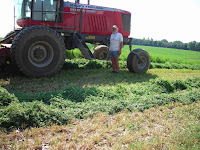 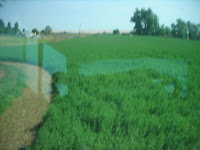 Later I cleaned out Henry’s crate since he had peed in it. After a scrubbing and drying in the sun, it was road ready. I packed some of my stuff and the kitties grew suspicious.

This three day visit was the perfect respite from the days of pounding the freeways, fighting rain, intense heat, mountainous terrain, hot sun, hazy conditions from fires across the west, and my own fatigue.  I knew if I put off leaving by a day I’d never leave.

Pablo tried to hide this morning. He knew by seeing me spray Feliway inside the crates (a substance to help calm cats) that we would be on the road again. Initially Henry didn't seem to mind traveling again, but he meowed non-stop for about an hour. When I stopped at a rest area Cheryl recommended near Ellensburg I saw why; Henry had pooped, but missed the box. He was a stinky mess, so I wiped him down with wet wipes. Once he was clean, I tried holding him with one hand while wiping out the crate, but he scratched the hell out of me. Maybe it was the freeway noise, or the breeze, so I pulled his blue blanket out of the car and rolled him inside it like a burrito so I could finish cleaning the carrier.

This is the first time Henry seemed annoyed by the trip. Otherwise he’s been a trouper. Poor kitty.

I had left the farm around 11, and hoped to be in Seattle by 3, but twenty miles outside the city traffic on I-90 stopped. We crawled for several miles before traffic unsnarled. It was 4:30 by the time I checked in. After hauling two loads of cats and crap to the room, I asked the front desk for restaurants within walking distance so I didn't have to drive any more. In fact I may never drive again. (At least not with cats.

The hotel is directly across from a Buca di Beppo where I enjoyed tomato basil soup, half of a margarita pizza (the other half will be a nice lunch tomorrow), and a glass of red wine. Now I am going to take a shower, unpack, and chillax.