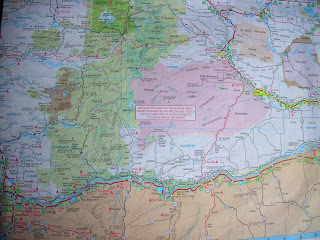 My friends in Zanesville, noted as being the fifth worst city in Ohio, often complain about the traffic on Maple Avenue. For about two miles between I-70 and Colony Square Mall, cars clutter both north and south bound lanes. Throughout the rest of the city one can drive with relative ease.

Traffic in Seattle is like that strip of Maple Ave. magnified 200 times. A five mile trip can take an hour depending on the time of day and road construction. Freeways are best traveled between 10 and 2 pm. Traffic is heavy, but it moves, sometimes even at the posted speed limit.

Traffic is going to get worse. High rise apartments and condos are springing up quickly and being squeezed onto lots that once held single family homes. The bus system in Seattle city is fairly efficient, but the light rail is limited, and if one lives in a suburb, he or she needs a car. My cousin Jena says traffic tends to keep people in their neighborhoods.

You’re wondering why I moved here.

I tend to use maps or landmarks to find my way. My GPS using friends and family think I’m nuts, but I think it’s good for my brain to discover a route on my own. If we become too reliant on technology to steer us in the right direction we don't truly learn the path, or its alternatives. I found this when students did internet “research.” Most used Google to find a site or two, and stopped there. They skated the surface of wisdom, avoiding the narrow back roads that may lead to a treasure.

I’ve grown comfortable knowing where to drive in Zanesville and Columbus without a map. Now I have to pay attention to detail to keep from getting lost. Sometimes I think those details change. I have yet to find this Barnes & Noble without getting turned around. Until I find a permanent place to land, the bookstore cafe has become “my spot.” I swear the landmarks change just to screw me up each time I drive here.

I use my GPS app only when I am deeply lost. The other day I tried to drive to Lake Forest Park. I followed the freeway sign for the Lake Forest exit, and thought I was headed in the right direction. After a half hour of driving and a couple of turns, I ended up right back at my hotel. I burst out laughing. I pulled into the parking lot, got directions from the app, and tried the trip again. I saw what my error was; I turned left in a spot where I should have gone straight. It looked vaguely familiar. (Of course it was familiar; it was near my hotel.)

My target on this venture was Third Place Books. I had come here several times when I house sat for Jena and Scott last year, and knew the route by heart from their house. One of the reasons I moved here is the city still supports independent bookstores. Zanesville is an hour’s drive from the nearest bookstore.

Every day I am here I get less lost. Today I am meeting my friend Cat at Third Place Books, and I’m pretty sure I can find it again. I’ll leave early just in case they move the landmarks.
Posted by Laura Moe at Tuesday, July 21, 2015